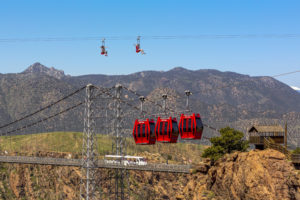 One day, about 3 million years ago, a trickle of water slowly began to carve out a canyon from the solid granite bedrock around it. Little by little, that tiny trickle became the raging Arkansas River, one of the United States’ longest rivers. And that canyon became the Royal Gorge. At approximately 10 miles long and surrounded by red granite walls towering over 1,000 feet, it’s no wonder some of the first American explorers referred to it as the Grand Canyon of the Arkansas. One of the most popular things to do in Colorado!

History of the Gorge

From stegosaurus to Sioux, the Royal Gorge has seen many kinds of visitors throughout its long history. Over 100 million years ago, dinosaurs roamed the Royal Gorge region, including allosaurus, comptosaurus, stegosaurus, and the mighty brontosaurus. Paleontologists have made fossil discoveries of these species less than three miles from the Royal Gorge Bridge.

Many, many years after the dinosaurs lived here, the Native Americans arrived, hunting and camping in sheltered canyons throughout this region. In fact, the Ute Indians, a mountain tribe, often wintered in the Royal Gorge to escape the wind and cold. And a number of Plains tribes, including Sioux, Cheyenne, Kiowa, Blackfeet and Comanche, followed buffalo herds into the meadows in the warmer months.

RoyalGorge.Info (RGI) is a reservations office/tour agency service offering vacation and travel packages in the Royal Gorge region of Colorado. If you need help booking a tour or buying tickets from this website call us at (719) 445-8300 or send an email.

NOTE: RGI is not the Royal Gorge Bridge, but we do sell their tickets. For info about their hours, services, etc visit RoyalGorgeBridge.com or call (888) 333-5597.