Canyon Run
Affordable, scenic and thrilling!  See the highest suspension bridge in America and the west side of the Royal Gorge Canyon.  Perfect for family activities, an affordable taste of helicopter flight or bucket lists.

Royal Gorge Adventure
This is our best value tour!  Packed with epic Royal Gorge scenery and plenty of thrills, this is the longest Royal Gorge tour we offer.  You will view the Royal Gorge Canyon in its entirety, as well as the highest bridge in America. 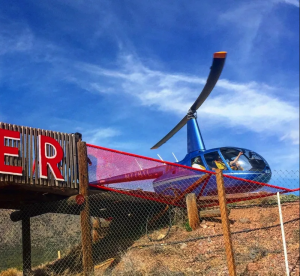 Today, helitours are flown by Will Sanders and Eli Plavney. Pilots Will and Eli have thousands of flight hours in Colorado’s mountainous environment.  Both pilots specialize in scenic tours, but have a background in a range of flight missions including search and rescue, airborne law enforcement, aerial photography, survey, VIP transport and passenger transportation.

The Robinson R66 is a powerful, turbine (Jet engine) powered helicopter that seats up to 5 people.  It is known for its power at high altitude, and is perfect for flying in Colorado’s mountains.  The seating is optimal for viewing, even from the middle seat, making it ideal for scenic touring.

2021 SEASON:
Year-round but limited availability and “call to book” in the winter (off-season). Click BOOK NOW to check availability.

“What a fun and memorable time we had! First class customer service…these guys do it right. It was a first helicopter ride for us and we really enjoyed it.”

RoyalGorge.Info (RGI) is a reservations office/tour agency service offering vacation and travel packages in the Royal Gorge region of Colorado. If you need help booking a tour or buying tickets from this website call us at (719) 445-8300 or send an email.

NOTE: RGI is not the Royal Gorge Bridge, but we do sell their tickets. For info about their hours, services, etc visit RoyalGorgeBridge.com or call (888) 333-5597.